Grassland Specialist at SRUC and Secretary of The South West Scotland Grassland Society.

A Quiet and Determined man 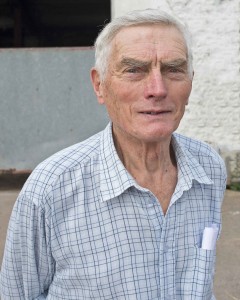 Gordon was born in Marshfield, Gloucestershire, into a farming community. Educated at Bristol University where he obtained Honours in botany and in 1955 graduated with a Phd in plant ecology, studying the semi-natural grasslands of the Cotswold and Mendip hills.
The grassland theme was to follow him throughout his long and distinguished career in agriculture.
However on leaving university he spent his two years of national service with the RAF, a trained air radar fitter.

After the RAF in 1958, Gordon secured a position with HM Overseas Civil Service in Uganda, specialising in tropical grasses (including his beloved elephant grass) and legumes.

In 1971 Gordon returned to the UK and to Wye College where he was involved for 4 years in a programme facilitating the introduction of maize as a crop to Britain.
1975 saw a move north to Ayr to be Grassland Specialist with the West of Scotland Agricultural College, conducting research mainly on upland grassland but also lecturing and undertaking a range of advisory work.
During this time Gordon was also secretary of the South west Scotland Grassland Society (SWSGS) a position he held from 1979 until his passing in December. He was pretty much a single handed administrator and organiser for the SWSGS, his dynamism produced annual journals, annual awards for the production of quality silage, innumerable meetings and farm walks. Many have come and gone within the society but his passion for farming and pasture meant it prevailed.

Gordon retired from the then Scottish Agriculture College in 2001 but he was never a stranger to his friends and colleagues and was always there to help out, and continuing in a consulting capacity with Grassland and Environmental Sciences then within the Environment Division and finally with Sustainable Ecosystems attached to Future Farming Systems.
Gordon was still trialling sweetcorn (and supplying samples for taste tests) and maize varieties at SRUC, Auchincruive up until his death and he retained his interest in botanical work, surveying hill grasslands, environmentally sensitive areas, evaluating grasslands for amenity and also airport safety.
Latterly Gordon was involved in the control of Giant Hogweed. Reported on the hay meadows of the Isle of Skye for Scottish Natural Heritage and completed a biological review of the Creeping Thistle for the Journal of Ecology. His knowledge of grasslands and plants lead to him being called as an expert witness at the High Court.
Always busy he was secretary of the Ayr and District Safe Drivers Association, active in the British Grassland Society, a member of the Scottish Wildlife trust, the Association of Applied Biologists and the British Ecological association.

Gordon is survived by his wife Mair, son Thomas, daughter Kathrine and his grandchildren.